Four years of basketball at Edgewood College may not have led John Fahey to a career as a professional basketball player, but that did not stop him from ‘making it’ in the NBA.

“I am currently in my fourth season with the Golden State Warriors. As a Video Scout I’m in charge of breaking down upcoming opponent game film: play sets, play calls, player tendencies and team tendencies. We create all the film the team watches prior to games and practices as well as assist coaches during team meetings, film sessions, workouts, and practices. It’s an extremely involved job that requires long hours. Most days tend to be about 14-16 hours a day in the office. But it allows such exposure to the game and a tremendous environment to learn that at no point in my four years have I ever once considered my job work. I wouldn’t trade it for any job in the world.” 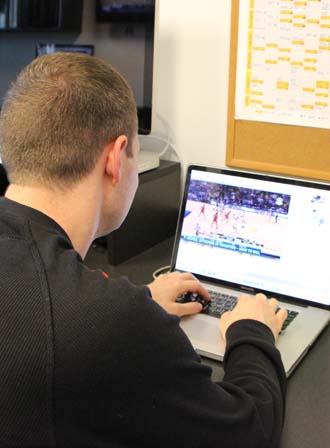 Fahey credits Edgewood College for many of the skills he uses day in and day out. “I graduated with a Business Marketing degree. My time at Edgewood College helped me prepare for my next step regardless of my concentration in school. As a student-athlete I learned how to build relationships and work together on and off the court, which has proved to be very important in all aspects of life, especially my field. I had some amazing teachers and coaches at Edgewood College that had a large impact on helping me reach this position, and become the person I am today.”

Like most things in life, Fahey’s job comes with challenges, but it is the rewarding aspects that make his position with the Warriors a true dream job. “The most challenging part of my job would be the amount of work that you put in on a daily basis to prepare for upcoming opponents. With games almost every other day and even sometimes back-to-back nights the preparation we put into games is extremely detailed and very time consuming.”

“There are some very rewarding parts of my job as well. The relationships that I’ve built and the places the game of basketball has taken me stand out the most. I’ve had the opportunity to work with people who’ve been role models to me since I began watching the game. I’ve also enjoyed the chance to get to know these people on a personal level, and learn from their journeys. It’s crazy to think that a small orange ball has taken me all over the U.S. and even as far as China this year for two pre-season games against the Los Angeles Lakers, something I never imagined. But at the end of the day being the competitor I am, being part of a team is something that will always drive me. To be able to do something I love and be with a group of coaches and players all fighting for the same goal: to be the last team standing in June. Now that would be something special.”