The Edgewood College Chamber Singers made history in March when they travelled to Quito, Ecuador as the first American collegiate choir to be invited to the Festival Internacional de Música Sacra (International Sacred Music Festival), one of the most prestigious Easter music festivals in South America.

The students were accompanied by Music professor Sergei Pavlov (on the left in photo above), Music department chair Beatriz Aguilar, and faculty percussionist Todd Hammes. The group joined two Ecuadorian choirs, the professional Coro Mixto Ciudad de Quito, and the Coro Juvenil (youth choir) for performances that took place on March 21 at Iglesia El Señor de los Puentes and March 22 at Iglesia de La Compañía de Jesús, two historic churches in Quito. In addition to the work by the choir, music professors engaged in various areas of scholarship, with Dr. Pavlov guest conducting the Coro Mixto Ciudad de Quito and giving a master class at the Mozarte Music Conservatory, Dr. Hammes giving a percussion master classes as part of the Festival, and Dr. Aguilar presenting a master class for music educators at the Mozarte Music Conservatory.

Under the direction of Pavlov, along with Quito youth choir director Cesar Espinoza, the early part of the week was spent helping the ensembles put together music they rehearsed separately in the months leading up to the 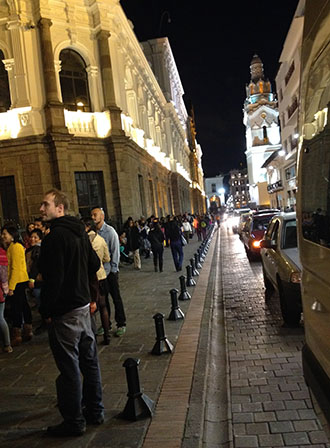 festival. Then came two exciting performances, where choir members were greeted by audiences that lined up for over a city block waiting to enter the churches. The students performed to full houses nightly, with huge crowds who rewarded the performers with standing ovations, as well as requests for pictures and autographs.

And of course there was sight-seeing. On the first night of the trip, students enjoyed welcome dinner at La Ronda, a local restaurant overlooking Quito, where some students tried traditional Ecuadorian food like Cuy (Guinea pig) and Higos con Queso (figs with cheese). They also took a walking-tour of the colonial town, including the Basilica de Voto Nacional, the largest neo-Gothic basilica in the country. One outing brought the students to Mitad del Mundo, a park located at the equator, where students took part in gravitational experiments such as attempting to walk on the equatorial line without being pulled to one hemisphere or the other. The choir also spent a day sight-seeing with students from the Quito youth choir. It was a wonderful opportunity for students from both choirs to connect and bond before their performances.

Music major Shelby Loock calls the trip “an amazing musical, cultural and educational experience.” Nursing major Jacob Reetz, also a member of the men’s basketball team, agreed. “This was an experience of a lifetime,” Reetz said. “Traveling abroad was something I never saw myself doing but Sergei (Dr. Pavlov) gave us an opportunity I couldn’t pass up.  I hope others will take advantage of programs like these because they are life-changing.”

“Dr. Pavlov masterfully organized and executed an invaluable learning experience for the students,” Todd Hammes said. “The cultural exposure gained by the students was transformative and the performance opportunities were intense and inspiring."

The Music Department recognizes the important role the Center for Global Education played in coordinating this trip, and and thanks their colleagues immensely!

(Shelby Loock, a double major in Music Promotion and English, contributed to this article.)