“It was a bit of a challenge when I started. But I’m a student now.”

When Chuck Monzon was finishing high school, he had “no idea” what he wanted to do next, he just knew it wasn’t going to college. His mother jokingly suggested the military; in a surprise move, he joined the U.S. Air 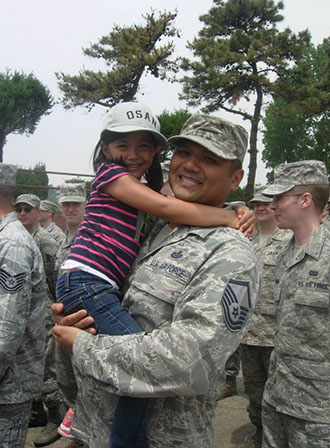 Fast forward to 2016, he now has two associates’ degrees, is fluent in Korean, is a talented singer, and has discovered what he want to do “when he grows up.” During his twenty years of service, he taught classes in military science. He discovered he loves teaching.

He plans to finish his undergraduate Biology degree in December 2016, and proceed directly into the College’s Masters in Secondary Education program, which will include his teaching credential. In addition to studying, this husband and father of two daughters is a Naturalist at the Aldo Leopold Nature Center in Madison.

He says the size of Edgewood College is what makes it right for him. “I’m used to dealing with people one-on-one, and there’s a lot of that here,” he says. “The one-on-one interaction is what I’m really appreciating.”

Entering college after a full career in the military called for some adjustments, he says. But the community both in and out of the classroom, and the relationships with professors like Jake Griffin (his advisor) make for a solid foundation for his next steps.

“We are all peers and we are all here to learn,” he says. “Yes, I have a lot more life experience than they do, but we are all ‘professional students.’ And they’re doing something that I couldn’t do right after high school, which I respect. I wasn’t ready for school; they are.”

Learn more about the College's Military & Veterans Services Office, and the students we serve, in the latest edition of the Edgewood College Magazine.