Faculty scholarship takes many forms at Edgewood College, ultimately enriching the academic experiences of our students. Along with a busy spring season producing concerts and recitals, teaching classes, and preparing for final exams, several music department faculty members had major performances in Madison.

Vocal Instructor Kathleen Otterson partnered with Jamie Schmidt (photo above), associate conductor of the touring Broadway Production of Disney’s “The Lion King,” in a recital at the First Unitarian Society in Madison. Schmidt was in Madison for a stop on “The Lion King’s” 2016 North American tour.  Schmidt attended UW-Madison for both undergraduate and graduate work, and for 13 years gave concerts with Otterson, who is herself an accomplished mezzo-soprano.

Schmidt’s path to Broadway began in Chicago, where he was director of the American Girl Place Theater from 1998-2003. From Chicago he traveled to New York, eventually becoming associate conductor of “The Lion King” in 2010. He has since toured from San Francisco to Miami; Denver to Chicago; Albuquerque to Montreal; Vancouver to New Orleans. The Madison recital was Otterson and Schmidt’s first appearance together since 2008. 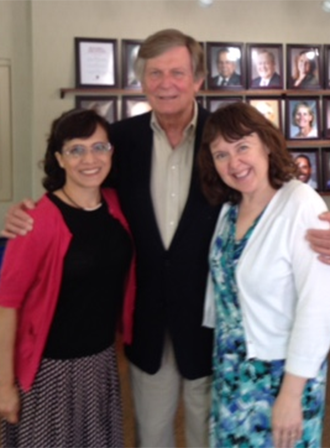 Philharmonic, as Flummerfelt conducted the Festival Choir of Madison in an evening performance, and presented a question/answer session at Edgewood College earlier in the day. (photo: Music Department Chair Beatriz Aguilar on the left, and Professor Julie Dunbar with Flummerfelt.)

Pavlov is music director of the ensemble, which was founded by Dr. Vernon Sell, former chair of the Music Department at Edgewood College.

Joseph Flummerfelt’s artistry has been heard in many of the world’s concert halls for more than 40 years. He is founder and musical director of the New York Choral Artists, and for 33 years was conductor of the world-famous Westminster Choir. Since 1971 he has been responsible for most of the choral work of the New York Philharmonic, and has collaborated with the world’s leading conductors, from Bernstein to Barenboim.  Flummerfelt’s choirs have performed with numerous other American orchestras, as well as European orchestras, including the Berlin Philharmonic, Vienna Philharmonic, the Gewandhaus Orchestra and the Royal Concertgebouw Orchestra.

Finally, at the end of May several faculty members joined former choral director Albert Pinsonneault in performances by the Madison Choral Project, a professional choir formed by Pinsonneault, who now also teaches at Northwestern University. Included in these performances were Kathleen Otterson, percussionist Todd Hammes, and guitarist Nathan Wysock.