With an estimated 3,000 graduates, their family and friends, and faculty and staff looking on, Edgewood College conferred the honorary degree of Doctor of Law upon Justice Shirley Abrahamson during Commencement on Sunday, May 19, 2019. 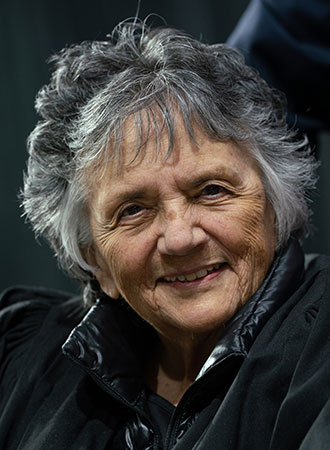 “Justice Abrahamson’s life embodies the College’s values of Truth, Justice, Partnership, Community, and Compassion,” Scott Flanagan, President of Edgewood College, said. “Her decisions show that she believes the law exists to serve the people. As the longest serving state supreme court justice in the country, her commitment to truth, justice, and fairness shine throughout her career.”

Justice Abrahamson, who is leaving the bench in July, addressed the ceremony from the podium. “Fortunately, I had to work much less for this degree, than you, today’s graduates did for yours,” she joked. “Edgewood College has a long history as an important and vibrant part of the fabric of the Madison community. I am especially proud today to become part of Edgewood’s history, and to have this opportunity to wish today’s graduates the very best of luck in the future. Thank you.”