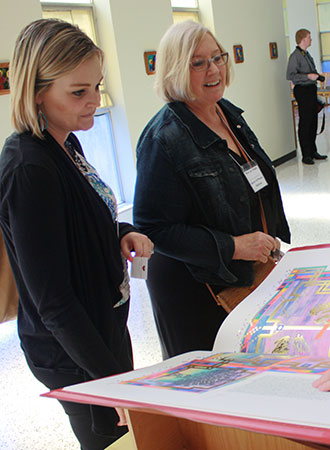 Edgewood Campus School. He later celebrated Mass in St. Joseph Chapel, which was attended by the presidents of the Campus School, Edgewood High School, and Edgewood College.

All who attended today had a chance to experience the Heritage Edition of the Saint John’s Bible. Jill Kirby, Assistant Professor of Religious Studies at Edgewood College, answered questions and shed new light on the seven-volume edition, which she uses frequently in her classes.

Sponsored by the Dominican Sisters of Sinsinawa, Edgewood College is a community of learners that affirms both its Catholic heritage and its respect for other religious traditions. We embrace and aspire to reflect the rich diversity of the world’s cultures and perspectives.
###