Madison, Wis. (August 27, 2019) – Edgewood College is honored to be recognized by Washington Monthly magazine by being placed on three of that publication’s 2019 rankings released this week. 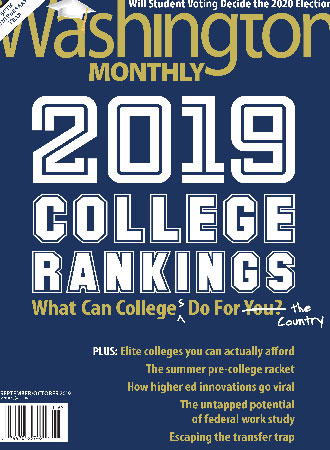 For the fifth consecutive year, Edgewood College is honored with a place on the ‘National Universities’ list in the Washington Monthly College Guide. The publication’s rankings are based on contribution to the public good in three broad categories: Social Mobility (recruiting and graduating low-income students), Research (producing cutting-edge scholarship and Ph.Ds.), and Service (encouraging students to give something back to their country).

For the second consecutive year Edgewood College was named to the ‘Best for Student Voting’ list. The ranking is based on voter registration and voting rates among students, participation in the ALL IN Campus Democracy Challenge, including making the results of the All IN initiative public, and other measures. Edgewood College is one of only 80 institutions out of more than 1431 four-year colleges on the list.

Edgewood College is once again on the ‘Best Bang for Your Buck’ list in the Midwest region. Washington Monthly calls the list “our exclusive list of schools ranked according to how well they help non-wealthy students attain marketable degrees at affordable prices. The list is created by isolating the social mobility metrics from the main rankings of four-year institutions.”

Washington Monthly was established in 1969 “as an independent voice in politics, culture, and the pursuit of good government.” For more information visit washingtonmonthly.com.
###