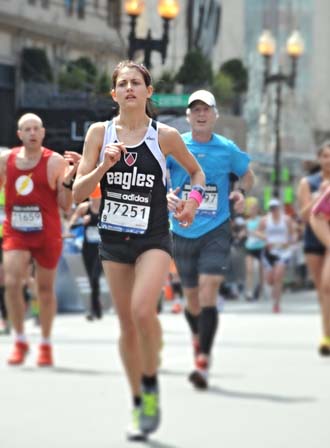 There may be a challenge out there that Kristina Santaga ’13 isn’t capable of meeting, we’re just not sure what it is.
The Green Bay native graduated with a BS in Biology in 2013. She was two-sport athlete – soccer and track & field – and today she’s in the College’s Accelerated Bachelor of Science in Nursing program.

On Monday, April 21, she was among the thousands of runners in the Boston Marathon. This year marked the first Boston Marathon since a terrorists’ attack near the finish line in 2013.

“I had so many of my fellow nursing students follow my run and text me before and after my race,” she says. “It was such an amazing experience to be there this year, so inspiring.”

“I ran proudly in an Edgewood College jersey and heard the crowd yell ‘go Eagles’ throughout my race. Being cheered as an Edgewood Eagle means a lot to me and helped me when it got tough,” she says.

“I kept thinking that, without Edgewood College and the wonderful professors, coaches, and staff, I wouldn’t be so driven to follow my passions. The compassionate, encouraging, welcoming, and spiritual atmosphere at the Boston Marathon reminded me of the Edgewood College atmosphere every day I arrive on campus.”
###