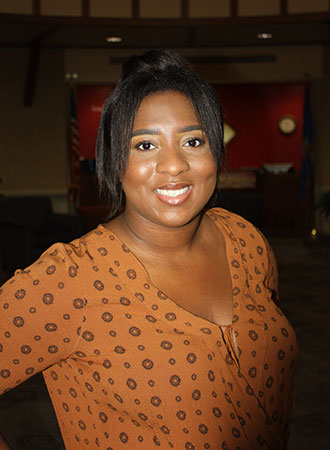 Shaquella Johnson, a senior Psychology major from Madison, isn’t kidding. Today, she’s organizing Freshman Orientation, getting ready for the new students who will arrive in August 2018. All told, she holds four jobs – in addition to being a fulltime college student.

The first in her family to attend college, Shaquella will graduate in 2019. She says her freshman year, without the context of all that a college education can be, she held back a bit. “I knew I was good at speaking,” she says. “I’m a very well-read person. But I didn’t know that I was good at leading people.”

Shaquella has served as the President of Black Student Union for the past two years. She works closely with the Office of Student Inclusion and Involvement, and with Dominican Life. “I like working with students to improve their experiences here. I see myself as someone who is an advocate, someone who is caring and wants to help people. That’s why I do as much as I do.”

But it’s what she does with much younger students that really stands out.

“I work at Elver Park Community Center (on the west side of Madison) with underrepresented teens from low-income families,” she says. “I really enjoy that: counseling, programming, supporting them and their families. That’s something I really care about – holistic approaches to help families do better and be better and stronger together.”

Without some of the pre-college programs she enjoyed, “I wouldn’t have gone to college,” she says. (That's Shaquella in the photo above, giving a 'tour' of Edgewood College to some of the young students she mentors.)

She says graduate school is in her future – either for a law degree or for Clinical Psychology or Neuroscience, so she can expand the work she does with young people – especially young people of color. She says her ultimate goal is to launch her own non-profit community center.

“I know how important it is for these students, who are first-generation, who come from low-income families to be in these programs,” she says. “I let them know, ‘I was you at 12 and 13 years-old. I was you having a hard time, and you can get out of that, and I’m a person who did it, and it’s possible.’ I know how important it is to be that person to look up to. I don’t want to say I’m a role-model, but I try to be. I hope ‘my kids’ see me as someone who cares.”

“I know what my purpose is: it’s to help people, to help kids and families,” she says. “I’m in a position now to give back – not as much as some people are but if it means giving my time, I will.”
###