“It definitely made me want to serve the underserved communities out there,” Jenny Kim, who is in the first weeks of her junior year at Edgewood College, said of her experience at the UCLA Summer Health Professions Education Program (SHPEP). 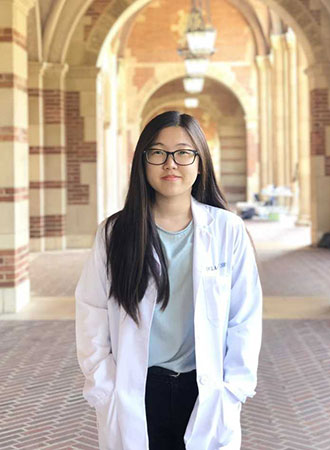 participate in the six-week program held on UCLA’s campus. SHPEP is free for participants, who receive a travel stipend and three meals a day while attending.

“I wanted to do it because I’m interested in getting into dentistry, and I wanted to build experience,” Kim said. “This program helped me determine that dentistry is the right fit for me.”

She had found the program with a quick Google search and says she “just went for it.”

The Biology major, who is from the Pacific island of Guam, was shocked and excited when she got the news that she would be attending this program in California that afforded opportunity and experience for Kim and her cohort.

“One of my favorite things that we did was a dental lab experience where we were able to make a mold of these model teeth and try some drilling and filling which was super awesome,” Kim said.  Lectures on anatomy and physiology and small groups facilitated by UCLA med students moderating case study discussions filled Kim’s schedule.

“Another interesting thing I learned a lot about is health disparities,” Kim said. “We were thinking about the community in a larger scale and realizing there are different communities that may not have access to certain needs and I learned that I need to be compassionate and help out wherever I can.”

This touched on the mission of the program itself, which is for freshmen and sophomore students coming from disadvantaged or minority backgrounds.

“It opened my eyes to another possible degree. I want to get a master’s in public health with my dental degree,” Kim said. “I feel like when I came to Edgewood College it definitely brought to my attention different backgrounds and perspectives and there’s a lot of ideas going around and to be open-minded and understand that people have different ideas, opinions and feelings. I saw that throughout SHPEP as well.”

Finding this opportunity and being accepted gave Kim another bonus in addition to feeling prepared for her future health profession.

“I met so many awesome people and they’re now some of my greatest friends. I’m really thankful that I was able to build connections and network,” Kim said.

Kim’s message for her fellow students: “Go for it.”

“I feel like a lot of students are hesitant about being accepted or being able to find a person to write a recommendation letter. I would just go ask and just apply for anything that you see that you are potentially able to get in to. You never know what experiences you can gain,” Kim said.