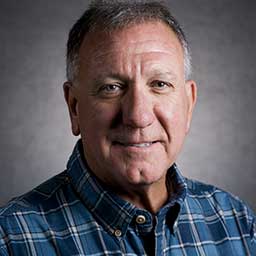 "...the fight against marginalization would be my life’s goal."

Tom Holub, Professor in the School of Education, shares his research on the Holocaust both on campus, and in the community.

As this academic year commenced, Holub presented “Every Veteran Is a Story:  From the VOICES of Holocaust Survivors,” at the Wisconsin Veterans Museum in Madison.

At the sold-out event, Holub spoke about his recent sabbatical, which he spent at the U.S Holocaust Museum in Washington, D.C. Dr. Holub has been a Visiting Scholar at the Museum for three years.  During his residence there, Dr. Holub interviewed 38 survivors of the Holocaust who went through this horrific ordeal as children.

For Holub, the work is both historically significant, and very personal. “Both of my brothers had significant disabilities and died as teenagers,” he said. “Ever since my life as an undergraduate at the University of Illinois I have known that the fight against marginalization would be my life’s goal.  The opportunity to become a Visiting Scholar at the U.S Holocaust Museum allowed me to study marginalization from a historical and international perspective and continue that quest.”

At the Wisconsin Veterans Museum, Holub’s program examined survivors’ stories, their liberation from the camps, and their appreciation of the Wisconsin troops that rescued them. And for Holub, that work continues.

“Because of the support of the School of Education, this Spring I’ll work with scholars at the U.S. Holocaust Museum to move toward the publication of a manuscript that embodies the work I have done thus far,” Holub said. Publication of that manuscript is scheduled for April of 2020.