Madison, Wis. (January 24, 2014) – Jam the Gym has been an annual celebration for Edgewood College athletic alumni for many years, but this year’s event will have a deeper meaning. The Eagles will rally their students, staff, faculty, fans and community to “Unite to Fight” cancer in all its forms in support of the American Cancer Society. A week of campus events will culminate with a Jam the Gym basketball “blackout” doubleheader on February 8 at 2:00 p.m. against Rockford University.

“Jam the Gym has always been a special celebration of our alumni, but this year we wanted to use the event to fight a disease the touches us all,” said Director of Athletics Al Brisack. “This will be a cross campus effort to raise both awareness and money, and give people the opportunity to honor their loved ones who have fought and are fighting cancer.” 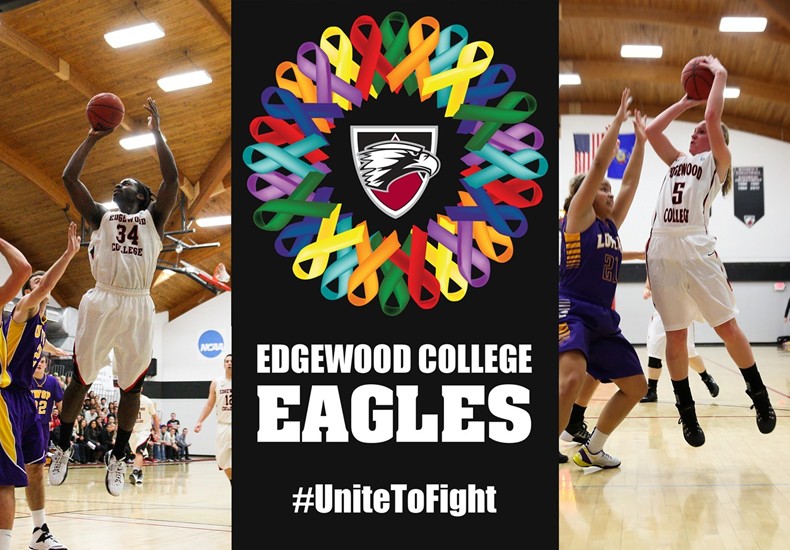 Edgewood College athletics will be selling black commemorative T-shirts, featuring the hashtag #UniteToFight, during the week and at the basketball games to raise money for the American Cancer Society. The #UniteToFight shirts will cost $1 for Edgewood College students and $5 for the general public. Additionally, an anonymous donor has pledged a donation of three dollars for every #UniteToFight T-shirt sold and worn at the games, enabling the Edgewood College community to make a serious impact in the fight against cancer. Fans who attend the games are encouraged to wear their black #UniteToFight T-shirts or other black clothing to support the Eagles and the cause. T-shirts are being generously donated by Madison screen printing company Think It Then Ink It.

The traditional Jam the Gym features will also return, including the popular VIP Alumni Lounge for Edgewood College athletics alumni. The VIP Lounge will be located on the Edgedome balcony and will give alumni a special place to re-connect with old friends and enjoy the game from a unique vantage point. Athletics alumni can RSVP for Jam the Gym via Eventbrite.

Edgewood College’s Residence Life Advisory Board will be conducting other events for Edgewood College students in the week leading up the February 8 basketball games, such as bandana tie-dying and a 3-on-3 basketball tournament.

“We are proud to turn Jam the Gym into an event that the entire Edgewood College community can get behind,” said Brisack. “There’s virtually no one whose life hasn’t been touched by cancer in some manner. We are proud to provide one way to fight back.”