Dan Oryall ’10 has translated his student athlete experience at Edgewood College into success professionally, and then some.  Oryall was a standout on the Eagle Cross Country and Track teams, and in 2010, he received his BS in Biochemistry.  Shortly thereafter, he began graduate study at UW-Madison to become a Physician’s Assistant.  In 2012, he began working fulltime as a General Surgery PA with Dean/St. Mary’s Hospital in Madison.  Today, he competes as a triathlete. He began racing in triathlons while at the College, as a way to supplement his cross country and track training. 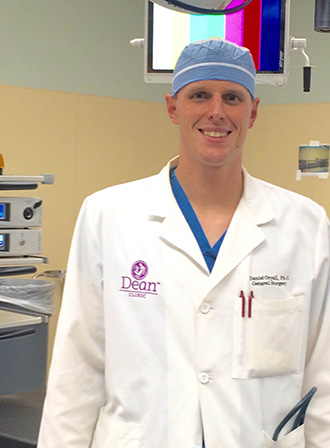 “While I was in college, triathlon offered me an ability to be ready for the cross country season, but cross train so that I could stay healthy for the whole season.  Being from Madison I always got excited when September rolled around for Ironman Wisconsin.  One year I thought I would give it a try and have been hooked ever since.”

He completed the 2013 Ironman Wisconsin in 11 hours and 19 minutes, but now focuses on shorter races, namely Sprint and Olympic distances.  Oryall credits his Eagle teammates and coaches for helping him become the strong competitor he is today.

“I feel extremely fortunate having been a student athlete at Edgewood College. Coach Bethany Brewster welcomed me into the program my freshman year as one of three males on the entire team.  Since then the team continues to grow and become even more competitive within the NACC conference.  My teammates and coaches pushed me every day to get the best out of me.  But they also helped keep me grounded and focused on the important things in life.  Often, practice and my runs with ‘the boys’ was an escape from exams, studying and work schedules.  It was something that I looked forward to each and every day.” 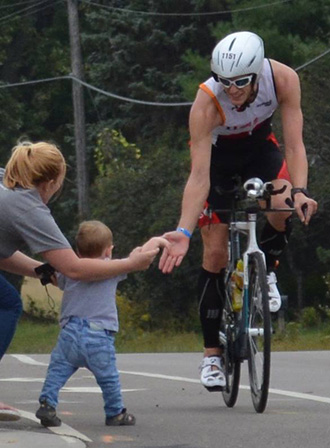 In September, he raced on Team USA’s Age Group World Championship team at the Triathlon World Championships in Chicago.  Despite suffering a stress fracture in his foot just three weeks before the race, Dan finished the Olympic distance course in 286th place out of 1,717 total competitors.

“Racing in the World Championships was an amazing experience that I will honestly never forget. On the final lap I didn't care about finish time or overall place, I really wanted to enjoy the experience. I grabbed an American flag at start of the finish chute and just took it all in. I am extremely proud to have represented Team USA.”

His drive and his abilities didn’t just emerge during graduate school, or with Team USA, however. An excellent student, Oryall was named to the ‘Who’s Who Among Students in American Colleges and Universities’ list for 2008. In addition to class and athletics, Oryall also took advantage of undergraduate research opportunities at Edgewood College, doing significant research in the area of ‘green chemistry,’ working closely with faculty in Chemistry, Geoscience and Physics. In 2009 he presented that research with a small team from the College at a national conference in Salt Lake City, Utah. Like many other students, he found the Edgewood College community easy to embrace, and had no problem engaging with life on campus.

“No matter where you were, in the dorms, the classroom or even at Phil’s, you sensed that you knew almost everyone that was around. From that, I enjoyed how many opportunities there were to get involved in while on campus; I was an RA my sophomore year, was the president of the Ambassadors, and was a member of a variety of clubs all while being a fulltime student and athlete. I was even a dishwasher at Phil’s. If I would have gone to a larger institution, I don't think I would have been nearly as involved as I was.”