Under the bright lights of the Diane Ballweg Theatre stage on a cold Thursday night in January, thirty-two cast and crew members are working with David Frank, former producing artistic director of American Players Theatre in Spring Green, Wisconsin. As they prepare for the February 26 opening of Bertholt Brecht’s The Caucasian Chalk Circle, students are connecting with a director whose professional theatre experience helped APT become recognized as the “best classical theatre company in America” (Wall Street Journal). 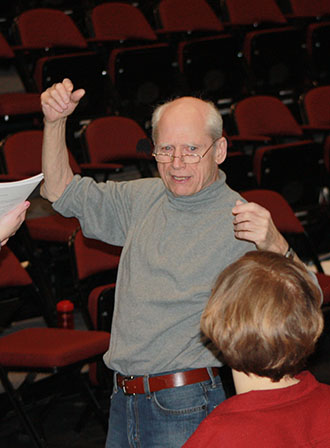 David Frank became artistic director of American Players Theatre in 1991, and became the producing artistic director in 2005. Under Frank’s direction, APT rose to prominence in the national theatre community. During his twenty-three-year tenure, APT became the second largest outdoor theatre devoted to classical theatre in the United States, and rose from almost insurmountable debt to becoming a $6.5 million company.

Students working with Frank, who represent such majors as Theatre Arts, Psychology, Communication Studies, Music, French, and Sociology, know that they have an amazing opportunity to tap the depth of Frank’s experience.

“Theatre is a collaborative art and every connection you make will benefit and possibly launch your career,” says Shelly Sarauer, stage manager for this production, and herself a Theatre Arts major. “Working with someone such as David, who has a breadth of knowledge, is an experience in itself…but his outside eye brings a new perspective.”

Mikayla Mrocheck, an English major who is a Talent Scholarship recipient in both writing and music says, “whether you’ve been involved in theatre your whole life or have never even stepped foot on a stage, working with someone as dedicated and knowledgeable about his craft as David is an incredible opportunity.”

Of his experience on campus so far Mr. Frank says “What is so attractive about this place is that it is so approachable. It’s easy to feel part of the community.”

Frank is looking forward to watching the actors grow throughout the production, which will be performed at the end of February and the beginning of March.