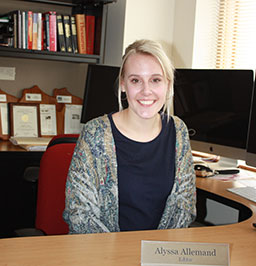 "It's definitely made me more confident."

Alyssa Allemand, a junior English major and minor in Women’s and Gender Studies, didn’t think of herself as much of a leader – until the summer of 2018.

“It was the middle of summer in little Gibson City, Ill. and Pat sent me an email and said the position had opened up, and said ‘I think you’d be a really good fit. Do you want to meet and talk about it?’”

The position was Editor of On The Edge, the student newspaper at Edgewood College. And ‘Pat’ is Pat Simms, English Department faculty and advisor for On The Edge.

Since meeting later that summer in Madison to seal the deal, Allemand has injected a healthy dose of enthusiasm, drive, and excitement around the newspaper and corresponding website – qualities that had faded a bit in recent years.

“I stay humble about it, but I have noticed increased participation,” Allemand said. “I know the newspaper has struggled in past years. My current problem is dealing with the number of stories to cover, and who is going to write what – but there’s no shortage of stories.” 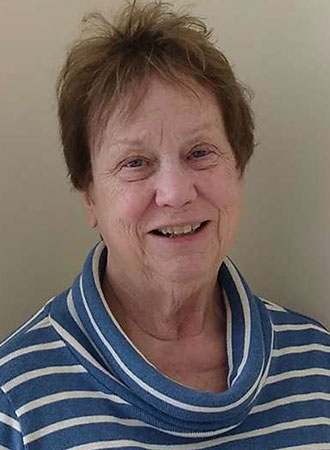 “She has a great attitude, which enhances her innate skills,” Simms (pictured) said. “Her enthusiasm is contagious, and she inspires a lot of loyalty from both friends and faculty.”

Her taking on the role just before the start of the semester is a bit out of character, she says. She likes structure, and knowing what’s ahead. Despite that “I haven’t regretted it at all,” she said. “It’s definitely made me more confident. I’ve had to become a really good communicator, and act as a ‘face’ for the student body. It’s been really awesome.”

Allemand also works as a tutor in The Writing Center and is active in the Edgewood College English Association, a student organization. “Edgewood College has become a very big part of everything I do,” she said “especially through the English Department. That’s where my opportunities have come from.”

Those opportunities keep coming; the week we spoke, she had just accepted a summer internship with the Wisconsin State Journal. She’ll work as a copyediting intern. It’s a fulltime, paid position.

Alleman credits both Simms and Associate Professor Lauren Lacey with supporting her, and helping to see the possibilities. “We were just talking on the phone last night about the State Journal, and we have conversations a lot, and she says ‘you’re really doing a great job,’ and I tell her ‘Pat, it’s because of you.’ There’s a mutual respect that I really appreciate.”

While a summer in Madison with an important job gives the small-town, downstate Illinois student a lot to look forward to, for Allemand it begins and ends with On The Edge.

“The feeling of holding the print copy, and looking at the website, and thinking, ‘I’m behind all that,’” she muses. “Nothing matches that feeling.”