Responding to Covid-19
The Plaza Tavern has been affectionately known for nearly six decades as a good old fashioned restaurant, and a staple of Madison’s downtown dining. Since its creation in 1964, the world famous Plazaburger has been served to over two million customers, including Johnny Cash, Bill Murray, and Brett Favre. 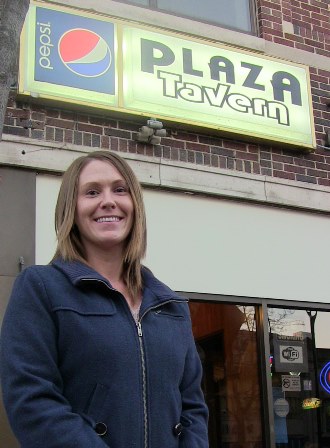 The Plaza is commonly characterized as a “dive bar” in the fondest sense of the word, even by owner Dean Hetue. What people don’t typically call The Plaza, or all dive bars for that matter, is environmentally friendly.
Katya Szabados, an alumna of the Sustainability Leadership Program with the School of Integrative Studies at Edgewood College, is determined to change that. An employee of The Plaza for several years, Katya had a hunch there was probably a lot that could be done to make the restaurant more ecologically friendly, but didn’t know how to do it.

"I would have had a difficult time getting this project off the ground without the Sustainability Leadership Program, which helped me to identify and engage stakeholders, and connect with community resources,” said Katya.  “Thanks to the program, I now see myself as a leader while carrying out the project and showcasing it to the public.”

Using the knowledge she acquired through her completion of the Sustainability program, Katya developed a model for what she likes to call the “eco-dive.” As part of her capstone project with the SLP, she began the implementation of several projects that would help rebrand The Plaza as an eco-dive. These projects included:

So far the project has been an overwhelming success. The energy reduction portion alone is a story worth telling. By simply converting their traditional lights to more energy efficient models, replacing neon signs with LED ones, adding motion sensors to lights, and adding insulation to the building, The Plaza has not only greatly reduced its energy consumption, but is projected to save hundreds of dollars annually.
The eco-dive has been a big hit with customers and staff.  “If a customer comments on one of our new LED vendor lights, my coworkers will gladly point out the difference and how it plays a part in our commitment to sustainability,” said Katya.  “Customers, for their part, have been excited about the changes.”
The best part is that all of these techniques and strategies are both sustainable and duplicable, so similar restaurants and bars could easily follow The Plaza’s lead. With just under 13,000 restaurants and bars in Wisconsin, the eco-dive movement would have major potential to drastically reduce the carbon footprint of the state.