“This is my way of being able to give back, and ‘pay it forward.’ But I get just as much out of it as I put into it. It’s a beautiful thing.”

Sherri Smith, a senior from Theresa, Wis., has served fulltime for nearly twenty years in the Wisconsin Army National Guard.

Through her connections with the Military and Veterans Service Office on campus she learned about Ride to Recovery, a national organization that provides opportunities for wounded and rehabilitating veterans to get out on bicycles and heal, whether it’s physical or mental.

She deployed to Iraq in 2009, and was herself wounded. She knows firsthand the subtle power of a simple shared bike ride. “There’s a lot of camaraderie and common experience that everybody has with the military jargon, and knowing and understanding what each has gone through. It makes being able to talk with someone much easier.”

Ride to Recovery has ‘Honor Rides’ which serve as fundraisers for larger trips for wounded vets. After two rides with the Edgewood College team, she and her husband Thom were hooked.

“Those Honor Rides end up being pretty special,” she says. “Not only the individuals that they help, but it’s a springboard and a platform for a lot of soldiers that don’t even know about the program, to get involved in the larger programs.”

The rides are coordinated by local chapters – called ‘Project Heroes’ – that are created where there is existing support structure for veterans, like Madison’s VA hospital, for example. “We got to talking about how do we bring a Project HERO here, to Madison. My husband and I decided to do this – out of our house.” 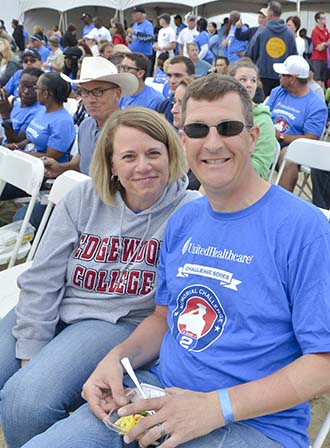 Sherri will fulfill her internship requirement by creating this new community resource, for a cause very close to her heart. She remembers one new rider in particular, wounded and now without the use of his legs. He rides a ‘hand-cycle.’ “It was the first time that he had ridden with somebody else – with a group,” she says. “When we got back to where the ride started, we sat and talked for an hour and a half. He just needed somebody to talk to. It’s kinda special when you can be that person for somebody.”

As part of the preparation to create a ‘Project HERO’ in Madison, this summer Sherri and her husband did the Normandy Challenge Ride;  320 miles through Normandy, France with 130 veterans, including 15 German veterans who themselves were recovering from injuries suffered while serving with coalition forces in Iraq and Afghanistan.

She’s on track to graduate with a BA in Psychology in December 2015. And the lessons she’s learning right now about life, and people, are powerful. But there’s just something about being out on a bike.

“It’s something that pretty much everyone can do – whether you do it really fast or really slow is another thing,” she says. “When you have that wind blowing in your hair, it’s a freedom that a lot of time these veterans don’t have. Whether they’re ‘trapped’ in their own minds, or they’re ‘trapped’ in their own homes. They might feel like they don’t want to get out and experience things with people. But somehow or another, when they’re on that bike… They’ve told me that’s the one time they’re free. They have that exhilaration. You get healthier, you feel better about yourself, and it’s just beautiful.”