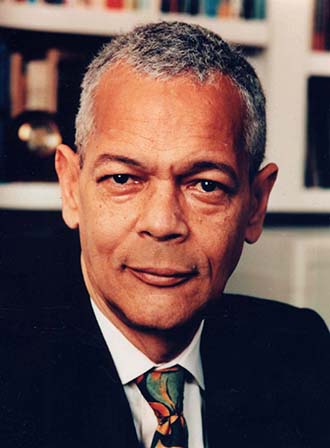 The College welcomed civil rights legend Julian Bond to campus as special guest of the 10th Annual Hatheway History Lecture. On March 11, Mr. Bond spoke of his personal experiences and efforts as a civil rights leader over the past 50 years. A webcast of Mr. Bond's remarks is available here.

“This address provides a timely occasion—for the campus community and the greater Madison community--to learn and to reflect deeply on issues of inclusion, peace, and justice,” President Scott Flanagan said. “In times like this, our Dominican call of study, reflection, and action has a great deal to offer.” Mr. Bond was announced as the special guest lecturer earlier this winter.

From his college days as a founder of the Student Nonviolent Coordinating Committee to his role as former Chairman of the National Association for the Advancement of Colored People (NAACP), Julian Bond has been an active participant in the movements for civil rights, economic justice, and peace and an aggressive spokesman for the disinherited.

Serving from 1998 until 2010 as Chairman of the Board of the NAACP, the oldest and largest civil rights organization in the United States, Mr. Bond worked to educate the public about the history of the Civil Rights Movement and the struggles that African Americans and the poor still endure.

In 2002, he received the prestigious National Freedom Award. He has also been named one of America’s top 200 leaders by Time Magazine. In 2008, he was named a “Living Legend” by the Library of Congress.

The 10th Annual Hatheway History Lecture is presented with support from the Bob and Carroll Heideman Crossing Educational Boundaries fund.