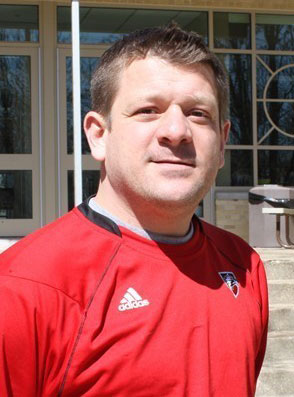 "As an Eagle soccer alumnus, Derek's love for the institution and our soccer programs has kept bringing him back," said Director of Athletics Al Brisack. "Our student-athletes have been the benefactors of this commitment. Both our women's program and men's program will notice immediate benefits from this promotion. We certainly believe this move will be a springboard for two successful programs to become even better!"

Helmer, a native of Oostburg, Wis., played for the Eagles and Coach Alexander from 1995-98, being named first team All-Lake Michigan Conference in both his junior and senior years. He is ranked third in school history with 86 career games played and competed on two LMC Tournament championship teams. After graduating from Edgewood College with a Bachelor of Arts degree in Elementary Education, Helmer spent one season as an assistant coach at Lakeland College. He returned to Madison as an assistant coach for Alexander and the men's soccer program from 2002-04. Helmer has coaching licenses from both the NSCAA and USSF and has spent 15 years coaching the Wisconsin Rush club team, based in Middleton.

His Edgewood College soccer roots run deep into his family life as well. Helmer is married to Julie Helmer (née Veloff), who is still the Eagles women's soccer program's all-time leading scorer having scored 104 goals from 1995-98. Derek and Julie live in Madison and own a small business in Sauk City, Wis.

The change brings an end to the men's soccer era of Tim Alexander's Edgewood College coaching career. In 25 seasons, Alexander compiled a record of 243-204-37, including two conference titles (1996, 2000) and three trips to the NCAA Division III Tournament (1999, 2004, 2005). Alexander was one of the few NCAA coaches remaining who still coached both the men's and women's teams concurrently. He has exactly 300 wins with the women's team, making him one of only 18 coaches in NCAA history with 500 or more combined victories.

"We cannot say thank you enough to Tim and Terri Alexander for the amazing commitment to our men's soccer program," said Brisack. "Over the years, they have been instrumental in the growth of so many young men."

In his new role of Director of Soccer Operations, Alexander will still supervise some of the day-to-day planning and operations of the men's soccer program, while continuing to serve as head coach of the Edgewood College women's soccer program.