Madison, Wis. (July 6, 2015) – Phil’s at Edgewood College has again been named a Certified Green Restaurant®. The Green Restaurant Association, an international environmental organization based in Boston, recently upgraded its rating of Phil’s to a “three star” designation. Phil’s was first named to the list in 2009, and is one of only three establishments in Wisconsin to earn this distinction. 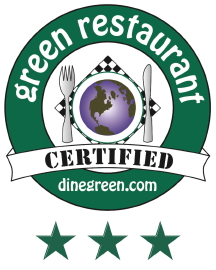 “This is something that is very special, and an honor we’re proud of as a community,” Dining Services Director Stephanie Durkin said. “Edgewood College is committed to serving our students in a sustainable way. They have played a meaningful role in achieving this recognition.”

Phil’s recently went “trayless” which results in less food waste and allows for a significant reduction in water use. Upgrades to equipment in the kitchen, continued emphasis on the local sourcing of food, and continued use of compostable disposables all played a role in achieving the new certification, Durkin said.