Samantha Wendt’s summer internship took her to unexpected places, but she still discovered a positive and rewarding experience.  Sam, a native of Oregon, Wis., interned at the Manitowoc County Domestic Violence and Sexual Resource Center, working in every aspect of the non-profit organization.  Her main duty was to simply talk with clients and help them in a variety of ways.

“I would talk to the clients who were in the shelter due to domestic violence or sexual assault problems in their lives.  I did what we call supportive counseling, I was an ear and a friend to them.  I also hooked them up with resources, I even worked with a few on resumes and cover letters.”

Due to the small staff, the senior Business major had to wear multiple hats, including helping the transition to a 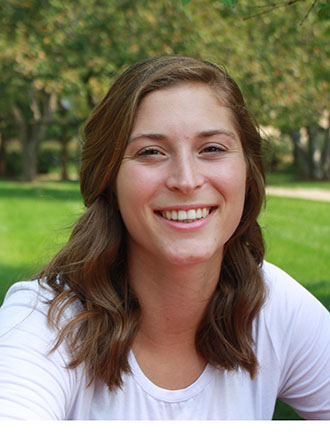 “They were building a new shelter that could house twice the number of people. I helped get the new shelter ready, worked with business operations, straightened things out and organized orientation for the new building.  Business gave me a good break from everything; it was emotionally wearing.”

Despite some hurdles, Sam was able to turn around some of the difficult realities of working in a non-profit.

“In non-profits you don’t have a typical day.  Generally the work environment makes it easier to develop friendships and to actually work in a team spirit environment, so I guess I turned a challenge into a positive thing.”

She found the opportunity through Career Services at Edgewood College.

“I can solely thank that resource because I would have never found or heard of this.”

The shelter was sponsored by the Wisconsin Association of Independent Colleges and Universities, which sponsors similar programs throughout the state.  Sam highly recommends it to anyone.

“I would say without a doubt it was a very rewarding experience because I walked out with more practical knowledge than I’ve ever accrued at a different position, ever.”

Now that her internship has wrapped up, Sam is off to study in the Czech Republic this fall.  She’ll first spend a week teaching English in Warsaw, Poland, before settling at Masaryk University in Brno, Czech Republic.

“I am doing a smorgasbord of classes.  Some business, some psychology, some mountain hiking, which is going to be my favorite class.  I’m planning on getting involved with their international club, it’s the top ranked club in the world.  I’m also working in the career center, counseling students in English, helping with resumes and cover letters.”

Expect to hear more about Sam’s adventures in Europe later this fall.