Envisioned Worlds presents a survey of prints by Beauvais Lyons, the self-appointed 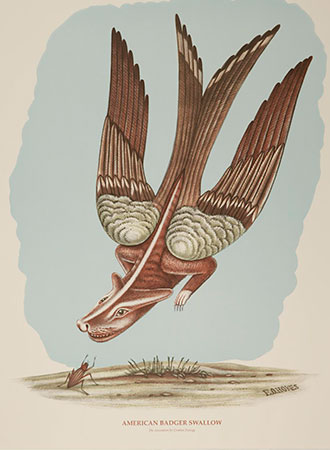 Director of the Hokes (pronounced “hoax”) Archives. Lyons has been creating elaborate works of academic and museum parody for more than three decades. This exhibition is comprised of twenty-five lithographs from three of his projects: “Reconstruction of an Aazudian Temple,” “Hokes Medical Arts,” and “The Association for Creative Zoology.”

Lyons will accompany his exhibition with a lecture about the imaginary founder of the Archives, Everitt Ormsby Hokes, at 4:00 pm on Friday, September 15 in Anderson Auditorium. The lecture will be followed by a reception in the Edgewood College Gallery.

Lyons’s art might be regarded as a form of science fiction, but one that uses historical methods of representation. Informed by literary and cinematic traditions of mock-documentation, he mimics images and writing that would seem at home in nineteenth-century natural history, science or cultural anthropology museums.

While Lyons work has been referred to as parody, irony and satire, it is presented with a deadpan sensibility which creates a tension between what is real and what is imaginary.

In The Charlotte Observer, Tom Patterson said “…Beauvais Lyons has done more than simply pull off a good prank. He has also raised important questions about our willingness to accept what is presented to us as institutionally sanctioned fact, and our tendency to romanticize the past. If you are paying attention, it should make you laugh and think.”

Beauvais Lyons is the Chancellor’s Professor of Art and has taught printmaking in the University of Tennessee since 1985. He received his MFA degree from Arizona State University in 1983 and his BFA degree from UW - Madison in 1980. Lyons’ one-person exhibitions have been presented at more than 60 museums and galleries in the United States and abroad. His prints are in the collections of the Smithsonian Museum of American Art, Washington, D.C.; The Whitney Museum of American Art, New York, NY and the Philadelphia Museum of Art.