Madison, Wis. (October 29, 2018) - The Women's Cross Country team captured the program's second-ever Northern Athletics Collegiate Conference Championship with a win at the league meet Saturday, Oct. 27, 2018 at Aurora University in Aurora, Ill. The Eagles, who totaled 54 points at the event, had to hold off Benedictine University (58) and host Aurora University (59) to win their first NACC title since the 2015 season. 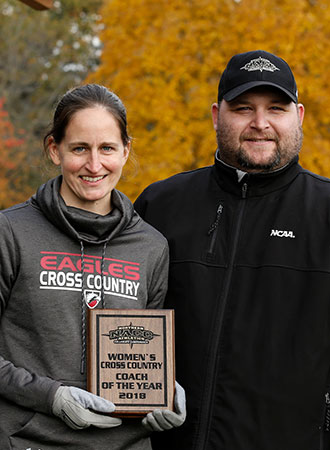 HOW IT HAPPENED
The Eagles had three runners finish in the top 10, all three garnering All-NACC accolades on Saturday. Piper Atnip finished second in the race, crossing the finish line in a time of 21:49.31. Taylor Mair came across the finish line in a time of 23:44.89, finishing fifth en route to her second-straight All-NACC Award. Joining those two on the All-NACC Team was Clara Berning who posted a time of 23:56.38, finishing 10th.

With the score as close as it was, it was important for the Eagles to get two more runners in the top 20 and freshmen Maddie McClimon and Lauren Kane did just that, finishing in 18th and 19th place, respectively. McClimon crossed the finish line in a time of 24:50.44 while Kane posted a 6K result of 25:02.25.

THE RACE
The race was incredibly close at the top with the three schools (Edgewood College, Benedictine, Aurora) separated by just five points.

THE COACH
Eagles head coach Bethany Brewster (right, with Ass't Commissioner of NACC Josh Schroeder) was named NACC Coach of the Year after guiding them to the team title. Brewster was also Coach of the Year in 2015 after leading the Eagles to their first NACC title.

UP NEXT
The NACC Champion Eagles will take part in the NCAA Division III Midwest Regionals, hosted by UW-Eau Claire on Saturday, November 10, 2018.
###