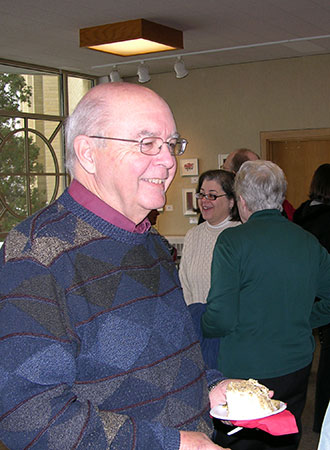 Madison, Wis. (December 18, 2018) – Edgewood College is pleased to announce a gift of $500,000 that creates the Rouse Family Scholarship, named in honor of Al Rouse, a longtime staff member and colleague.

Fred Rouse, on behalf of his brothers and sister, said their older brother Al has a special place in his heart for Edgewood College.

“He dedicated a large part of his life to do the best he could for Edgewood College,” Fred Rouse said. “So many of his family attended and graduated from there. It’s a special place for Al, and his whole family.”

Al Rouse joined Edgewood College as College Business Officer in 1971. During his nearly 40 years of service, he worked closely with a total of five Presidents and was instrumental in navigating numerous peaks and valleys in the institution’s history. He retired in 2007, (pictured here celebrating that milestone) after the successful completion of Dominican Hall, the LEED®-certified residence hall on campus. He and his wife continue to make their home in DeForest, Wis.

“Al Rouse was one of the first people I met when I started my career at Edgewood College twenty years ago,” Scott Flanagan, President of Edgewood College, said.  “I quickly learned what others already knew—that Al carries an exceptional passion for Edgewood College, that he can be relied on as a trusted advisor, and that he is a thoughtful colleague and friend. Al’s name is etched deeply in the Edgewood College story, and this investment in our students is a fitting tribute to Al’s many years of service and the impact the Rouse family has had—and will continue to have--on Edgewood College. We are grateful for the Rouse Family’s generosity and support.”

The Rouse Family Scholarship will be available to fulltime undergraduate students with demonstrated financial need in good academic standing at Edgewood College.

In the most recent measure, fully ninety-eight percent of incoming freshmen received financial aid in the form of scholarships and grants. At the same time, Edgewood College has maintained its place in the top twenty-five percent most affordable private colleges in the state of Wisconsin.
###