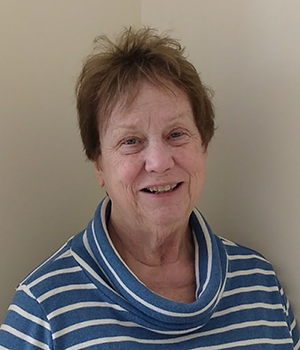 We extend our deepest sympathy and heartfelt compassion to the family, friends, colleagues and students of Patricia Simms, who died at 75 of cancer on Monday, April 5, 2021, surrounded by her children.

Special thanks to our colleague, Ellen Foley, who prepared the following biography of Pat, her friend of many years.

“An indefatigable reporter and columnist, Pat worked at the Wisconsin State Journal for more than 40 years after graduating from Daemen College and earning her master’s at Northwestern University’s premier Medill School of Journalism. A native of Buffalo, NY, she was renowned for her coverage of health issues, breaking news reporting and the snarky Snoop gossip column in the 1990s.

“She wrote some of the most important stories of her era, including the 1970 bombing of Sterling Hall at UW-Madison and the shooting at a day care center in 2004.  Governors, business titans, and advocates knew Pat and revered her. You couldn't go out to eat in Madison with Pat without several people stopping at the table to say hello.

“Pat had the talent and skill to work for a much larger news operation but chose to stay in Madison after her two children were born in early 1970s. She raised them as a single mother supported by a large network of friends. She was one of the first women to get maternity leave at the State Journal and often the only woman at news venues in her early years. She befriended younger journalists and treated them to dinner or inside tips on an assignment, earning her a reputation as a mentor.

“Many who knew her remember her sharp sense of humor and her fighting spirit.  Her daughter, Sara Lalander described her mother as fearless.

“In retirement, Pat taught at Edgewood College and told friends it was what kept her going and gave her life meaning after leaving the newsroom. She was famous for loitering in hallways during the first days of a semester and enlisting students who looked like they would be good journalists for On The Edge. Many had no experience, but they learned quickly with Pat's guidance and life lessons. Pat re-built the staff into a national award-winning news organization that developed media professionals, some of whom now work in Wisconsin newsrooms.

“Many female journalists see Pat as a role model and pioneer.”

May she rest in peace.